ravetye Manor has been open as a hotel for 60 years. To mark this grand anniversary a new Michelin-star restaurant has been built in close proximity to the historic garden. Floor to ceiling sliding glass from IQ was installed to provide the diners with an indoor-outdoor living experience that draws them closer to the historic gardens; as head chef George Blogg predominately uses homegrown produce from the Manor’s kitchen garden, the diners are drawn even closer to the property’s land.

Gravetye Manor is a Grade I Listed Building that was built in 1598, for Richard Infield and Katherine Compton to reside in once married. However, in 1884 the infamous gardener, William Robinson, bought the Manor and dedicated his life to styling the one-thousand-acre estate into an English natural garden. Peter Herbert took over the property in 1958 and transformed the Elizabethan Manor into a grand hotel, which then became established as one of the leading establishments in its class, recognised for offering high-class Country House Hotel Hospitality. To retain the rich history established at Gravetye Manor, Jeremy Hosking (the owner since 2010), set out to rejuvenate the property by focusing on William Robinson’s own vision for Gravetye by ensuring all changes were considerately carried out.

The architect for this project, Charles Knowles Design, ensured that the historical features of this Grade I Listed property were maintained and celebrated by specifying the minimal windows® sliding door system for the new restaurant. This glazing system is exclusive to IQ in the UK and has a vertical sightline of only 21mm, therefore the windows do not obstruct the sweeping views across the property’s estate. As this glazing system is sliding, the walls of glass can be swiped to the side to reveal an open aperture for the diners to enjoy fresh air, sweet aromas from the garden while relishing the view.

In addition to the sliding glass doors, an automated rooflight was installed to provide overhead lighting to the dining area. Rooflights can either be manufactured as venting or sliding rooflights, in this case, a MARS® sliding glass rooflight was used. The automation provides easy use as the rooflight can be opened at the touch of a button.

The new restaurant opened its doors for the first time in June 2018 and has been welcoming guests to dine while enjoying the wonderful garden views showcased by the minimal windows® sliding doors. 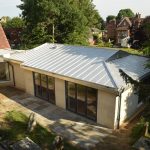 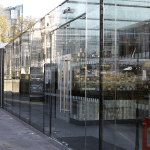