reat George Street is a seven-storey commercial office building in Bristol that recently underwent a refurbishment. The architects at Barton Willmore were commissioned to create a new visual identity for the redesigned building. The new designs included many modern and sustainable features including an all-glazed atrium.

These glass walls have an EI30 fire rating, offering fire resistance for up to 30 minutes. These fire rated walls were integrated with fire rated framing systems to create a fire rated elevation that is contemporary and minimalist. IQ Projects installed the glazing so that any fixings were hidden into the building leaving a full glass opening.

Installing large internal glass façades allows the natural light from the glass box at the atrium to pass through into the building, through these façades and into office spaces throughout. Structural glazing was used to create an impressive glass box at the top of the atrium for maximum light intake and incredible sky views and views of the city. With the frameless effect, structural glazing prevents obstruction to light or views and is structurally supported by low iron glass beams. Using low iron glass prevents the greening effect of the beams to create a clear view whilst continuing the frameless design of the atrium.

Frameless glass balustrades were installed onto the stairwell in the building to enhance the safety of the workers and to follow the frameless, contemporary design throughout. The glazing used is fire rated EI30 to match the fire-rated glass walls. 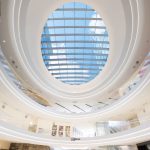 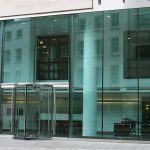