Q Projects were involved in the development of the extensive refurbishment and expansion of the British Academy of Film and Television Arts Headquarters at 195 Piccadilly. Designed by Benedetti Architects, the new development included enlarging the entrance, creating a David Lean room featuring the latest technology, new flexible event spaces and a new fourth floor which is home to the Richard Attenborough rooms. The brief was to include high functioning rooms while adding an additional storey on top of the existing Grade II Listed Building. The new top floor will be created by uncovering, raising and restoring the historic wrought iron trussed roof lanterns that formed part of the former Institute of Painters in Water Colour constructed in 1883.

Kevin Price, Chief Operating Officer of BAFTA on the renovation “BAFTA’s ambitious plans will make our home at 195 Piccadilly an international center of excellence for the motion picture arts. We are excited by the ideas and scope of the design by Benedetti Architects to fundamentally enhance every aspect of what we do while being sensitive to the character of the building we are so fond of.”

The most recognizable feature of the Richard Attenborough rooms is the wall lined with slim framed sliding doors, creating cascading light to bleed through the gold partially opaque curtains. The interior design of both Richard Attenborough rooms uses the original architecture from the 1800s mixed with stylish design and furnishings to create a seamless mixture of old and new design.

Slim framed sliding doors were chosen due to their 21mm slim sightlines which allow beautifully uninterrupted views of the surrounding view of the West End and Piccadilly Circus, Central London. These large, elegant sliding doors lead onto the balcony and outdoor social areas. These sliding doors provide the guests with a sophisticated transition from the interior out onto the private patio.

The use of the oversized glazing at BAFTA improves the natural light intake into the rooftop space, while also providing seamless access to the top floor roof terraces. These ultra-slim framed sliding doors were designed in multi-pane configuration, providing a large opening when fully opened. The configuration also allows easy access to the balcony to be able to appreciate the incredible views from outside the event space. The modern glazing at BAFTA encourages the guests to enjoy fantastic views from within the building, enjoying the feeling of being outside whilst inside.

BAFTA partnered with glass specialist Eyrise to provide solar shading for a newly created fourth floor. Glazing applications were used to shelter the original rooflight boundaries, the imported glazing from America featured 82 liquid crystal windows installed to glaze two restored Victorian rooflights. The windows were of varying shapes and sizes and were specially designed for the project.

The large rooflights had been hidden since 1976 when they were covered to create a dark space for a 227-seat cinema named the Princess Anne Theatre. The Victorian heritage building has old and outdated technology, updating this was a priority to enhance the sustainability which was the focus of the refurbishment. The new rooflight glazing has liquid crystal technology which can automatically adjust the shading of the glazing to reduce solar gain, resulting in a lower cooling requirement.

The overall glazing for the BAFTA Richard Attenborough Rooms required a lot of careful planning and close communication between the contracts team here at IQ, this was due to the newly raised levels of the historical rooflights. The resulting project has received astounding feedback from both BAFTA and the public and IQ was proud to be part of such a beautiful final project.

To get in touch with the team about specifying a slim sliding door solutions, click here. 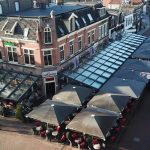