Wellington College is an independent school based in the village of Crowthorne in Berkshire, traditionally a boarding school but also offers co-educational day schooling. The school currently teaches roughly 1,100 pupils, between the ages of 13 – 18, per school year.

The Wellington college is named after the first Duke of Wellington, Arthur Wellesley, who was one of the leading political and military figures of the 19th century in Britain. The school was founded in 1859, due to its 151 years of history many historic and listed buildings can be found on the school grounds.

The school library is part of the main listed school building which recently had a refurbishment to give the library a slightly more modern school design. The Mallinson Library is divided into eight various spaces to reflect the Eight Aptitudes of Wellington College, these are, Linguistic, Logical, Cultural, Physical, Spiritual, Moral, Personal and Social.

Structural glass balustrades with lows iron glass and stainless-steel rails and fixings were fitted to the twin sweeping staircases to the upper levels of this library re-fit, leading to new meeting rooms formed with IQ’s internal minimal sliding door system.

Both glass meeting rooms are designed using curved structural glazing and curved internal glass sliding doors with low iron glass for access to and from the meeting rooms which slide elegantly along minimalistic stainless-steel tracks.

Each aspect of the glazing was carefully considered to provide the client with a design that met their exact requirements. Frameless glass was chosen for these new internal rooms as it does not obstruct the natural flow of light, something that is very important in educational building design.

The structural glass used on the outside of the college is supported by glass fins which are also made with low iron glass to provide maximum lighting throughout the building. Structural glass fins were integrated into the bespoke shaped structural glazing to increase the supports needed for the four panes of glazing; minimal glass connectors were used to fix the glazing to the grade II listed building with minimal interference to the natural brickwork. 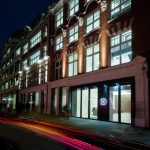 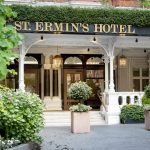